Congratulations to Cdr. Yadav and Lt. Cdr Kanwar, of the INAS 315, proud pilots of the Winged Stallions, INS Hansa

I read of it this morning, in the Indian Express, and was glad, for these brave pilots Cdr. Yadav, and Lt. Cdr. Kanwar,  who have been awarded the Shaurya Chakra, (the third in the ranking of honour, after the Ashok Chakra, and the Kirti Chakra) belong to the IL-38 Squadron, the 315 Squadron, INS Hansa, Goa, commanded by my younger brother, Capt. V. K. Pisharody. They call themselves the Winged Stallions, and an edifying statue of a Pegasus stands guard at their Squadron building.

The Ilyushin Il-38 formally entered service with the Indian Navy on 1 October 1977, with the commissioning of INAS 315 “Winged Stallions” at INS Hansa in Dabolim, Goa. The squadron was formed with just three aircraft in 1977 and two more examples joined the squadron in 1983.

They had had the best safety record amongst the squadron, when tragically, a freak accident occured during their 25th Anniversary celebrations, on 1 October, 2002. The mid-air collision between two IL-38 long-range patrol aircraft of the Indian Naval Air Squadron (INAS) 315 in Goa was cruel irony. The occasion was not just a celebration of INAS’ silver jubilee but also of over 30,000 hours of accident-free flying. All aircrew on board both aircraft were killed and both aircraft were destroyed.

This morning, when my brother called, it was a voice rich with emotion, and pride, and vindication of all the work done by the Squadron, to regain, and restore the former glory. It was truly deserved, for the Naval Aviation wing is not in the news much, and this time, it was, for all the right reasons. After 20 long years, a bright shining light has fallen upon them, and held them up for all to see and applaud! 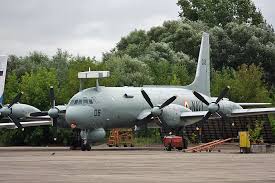 (Image from web 🙂 Though I have a bonafide picture, I dont think I will be forgiven for using it 🙂 )

Here is the article itself 🙂 From the Times of India, online edition.

VASCO: It’s an honour that is rare even if measured by the Indian Navy’s high standards of heroics.

It’s not often that a real-life hero’s act of valour and courage is so outstanding that the country deems it fit for honour. And when you consider that this has occurred after 20 years in the aviation history of the Indian Navy, the effort and the achiever have to be special.

For the first time since 1991, Cdr Niteen Anandrao Yadav — an aviator of the Indian Navy, based in Goa – has been chosen to receive the Shourya Chakra, the third in order of precedence of peacetime gallantry awards after the Ashoka Chakra and Kirti Chakra.

Lt Cdr Ajay Kanwar, first pilot during the operations that earned Yadav the Shourya Chakra, has also been rewarded with the Nao Sena award for gallantry.

Yadav’s moment of truth arrived in the afternoon of May 22, 2009 when he was detailed as co-pilot and safety pilot for a search and shadow mission.

Aboard the massive IL38 aircraft and in the face of cloudy weather, the IL38 — for the first time in the history of its operations in India and Russia — encountered a situation where all the generators on the aircraft failed one after the other. The aircraft experienced what is known as a total electrical failure. The oil radiator shutters were stuck in closed position and the radiator was unable to perform its function of cooling the engine.

This, not surprisingly, led to an imminent possibility of the engine catching fire in case of prolonged flight at low altitude.

“It’s very difficult to keep one’s mind cool and display professionalism in such a scenario, which Cdr Yadav managed to do,” Pillai said.

Taking charge, Yadav prevented a catastrophe, leading his superiors to point out how his exemplary courage, outstanding professionalism, superior leadership, and perseverance were all in keeping with the highest traditions of the Indian Navy.

With his several years of experience, Yadav directed the first pilot Kanwar to reduce altitude so as to avoid freezing because of the height. He lowered the undercarriage (the aircraft wheels) immediately before there was loss of electrical power and delayed descent in order to minimize risk of engine fire at low altitude.

Yadav provided flying inputs at the crucial time of landing approach to a relatively inexperienced first pilot Kanwar (who had only 13 hours of flying experience then) to fly the aircraft bereft of virtually all instruments necessary for flight.

Born in Karad in Maharashtra on May 2, 1970, Cdr Yadav was commissioned as an officer in 1992 and has flown four kinds of aircrafts. He commanded the Indian Naval Ship INSDB T60 in 2005. His wife and two children live in Mumbai.

23 thoughts on “A Word of Congratulations!”