It is always gracious of a reader, on a blog, to leave a comment. The thrill, the happiness that said blogger feels is quite something else. What if that comment, regular as they come for however the blog posts may be, are in limerick form? Not just a two lines, a few words of general appreciation, but a succinct slice of the essence of the post itself? You’d smile and jump for joy too, wouldn’t you, even if you aren’t the blogger? And secretly wish one was sent your way, even if you be a reader of the blog, or the comments 🙂 🙂

And when that said Limerick Commenter has a birthday, what virtual gift can one best give her? The joy of her own kind of lines, for a start, right? So here it is… a gift for the Gorgeous Gulshan Gev Bamboat, sometimes Aunty G, too, in the comments section of this blog, and other blogs/updates/posts right on time, each time, for a long time! Shail, thank you ever so much for introducing us in this virtual world 🙂 You are someone I have to meet, Gulshan!

Her alluring verses and words never fail to impress!

You’d know her, if here, you’ve been sorta regular 😛

Her comments come in, right-on-the-spot-spectacular!

‘Coz they be ultimate 5 liners, her own brand, her specialty, the Limerick Seductress ❤

One more, with affection and sweet love, from a young ‘un who’s so taken up with your awesome way of writing, Stargazer aka Malavika, my student 🙂

‘Tis a special day today, the birthday of a Queen,
A Queen, who over the realm of Limericks reigns supreme.
In her hands, words like quicksilver meld and flow,
At her command, across paper they dance and go!
And many happy returns I wish– to this indeed, wondrous Limerick Queen!

It isn’t that good, and it isn’t really a funny limerick, but it is my first attempt at writing a limerick, and it was really hard to think up an idea!

Anyhow– many happy returns to Gulshan! May her limericks only get better and better! Please do tell her this from me! (Even if it is without the attempt at a limerick.)

Till then, here’s a toast to you…. 🙂 Stay as sweet and cheerful, loving and laughing, and blessed always! Happy Birthday Gulshan! ❤ You’re the best 🙂 🙂 Hugs!

A previous mention of her, here 🙂 (LINK)

Hold but a single thought
As you daily
Work. Play. Laze. Obsess.

You can.
All of these.
For one single reason.

(Quite apart from your heart-lung function)

You live in a free land.
In Politically Correct terms.

A land they help
Keep that way.

For them, hold that thought.
This day.
And all the others too.
When you can.

If, also, you could
Spend a gracious thought
For their brethren, no more…

They gave their today for our tomorrow.

As if they were your own loss.

Today is the 16th anniversary of the #KargilVijayDivas. A day that brings to me that year, 1999, a grey rain soaked day, in June, when a young girl’s brave and determined step (no more than 8 or 9 then), her mother’s vulnerability, and her brother’s capriciousness, quite ignorant of the fact that their father had made the ultimate sacrifice at Tololing, came to the Primary Block of our school, to admit the young lass at our school. The family is at Drass, Kargil this day, to join the observance of the Anniversary there. The siblings studied at our school.

Anjali, an out and out extrovert, multi-faceted, a topper at both 10th and 12th classes, who went on to NUS, Singapore to do her engineering. She works there now. Her brother, Akshay, a charming young brat while at school, has sobered down ( I wonder though 😀 ) to doing an integrated Master’s Course in Photonics at CUSAT 🙂

Each year this day, the heart stops a while. It will always be associated with seeing Anjali for the first time, and forever being in her debt for teaching this heart to be strong 🙂 Anjali and Akshay, today this blog salutes your father, Lt. Col. Viswanath, and your family, along with the families and soldiers of all those who gave their all that year; to all those who still work towards keeping our land free.

The pictures have been taken from the internet, and without permission from Anjali’s FB album. Anjali, I hope you will excuse me 🙂

Her head in the clouds
She wafted home,
Barely suppressed glee
Naked as the day
Deep as a lake
Warm enough to melt rocks…

She gave herself a
Heads up –
Waves of satisfaction
Pooling;
How wishes  do come true!

This post is written for (the first of many one hopes 😀 ) Weekend Word 8 at A Prompt Each Day (Daily dose of inspiration) which is the brainchild of Vinay‘s 🙂
Today’s was a set of words of which one needed to use any three in the blog 🙂 , the words being these 🙂 I’ve overdone it as usual, and used ALL of them 😀

She wasn’t there when he arrived. She wouldn’t come, he was sure of it. God! How he begged her, for one last chance to see her, before she left. It wasn’t going to happen for the next five years he knew. And then? Same old, same old… his heart harped. The first love, the first crush, the first infatuation in his life, and he was going to lose it all. To say that he now felt deeply, and empathized with all the unrequited lovers before him was an understatement.

Yesterday, when he had met her, he implored with her, setting aside all his manly distaste for begging, to meet for a cup of coffee at The Third Floor, where they would be privacy, and yet she’d feel alright. So there he was at the ground floor, looking more desperate as each moment passed. Half an hour after the time he’d asked her to be there, he knew, despairingly that this was it. He resisted the urge to keep checking his cell phone, and the longing to text or call. The response he would get, or wouldn’t wasn’t how he wanted to remember her. Even so he continued to wait.

Life, he mused, tragically, in the same vein as all those who love and lose, was such a bi*@#. No seriously. If she did not come, or call… All the ifs of his wishes, he was willing to forgo, for the pleasure of seeing her before she left across the oceans, to pursue her dreams. His dreams? Ah. The pain was sharp and slow.

A bird chirped. That notification note! Joyfully, he swiped across the screen, to see her name along with the message. An apology, wishes, a goodbye. Just like that. He did appreciate her telling him so but wished she’d done it in person. Would their friendship sustain? Distance had a way killing a lot of things, and an unresolved relationship didn’t stand a chance.

Dramatically, he vowed never to get into such a situation again. His energies would find a new direction. He’d put all his angst into his work at college. He was set for life. The drama helped quell the turbulence of his heart, and he quietly walked across the road that led into the small centralized shopping area. Perhaps he should call a friend, just in case, you know. Immediately quashing that tremulous thought, he kicked a stone, that flew up and hit a motorist, fortunately on his arm. The abuse hurled his way actually made him feel better. Just then his phone rang.

“Da! You get here soon. Ten minutes. We’re waiting for you!” That was Singham that irrepressible, lion-hearted bear of a friend. Quite unempathetic, but good enough to unwind with.

He sped across to Trident.

There they were, Singham, Pashu and Mani, waving tickets. “Can you beat it? We got tickets for Baahubali!” Pashu was screaming.

Quickly, the four of them got into the theatre. Singham held back, asked the other two to go on, and gestured with his little finger. Laughing, they went ahead. The cinema hall was a riot. Luckily there were seat numbers, and the trio settled in. The lights began to dim, music played, whistles and catcalls rent the air. The only light was from the screen now.

He wondered if he’d enjoy the much talked about film, the feelings still being raw and all. The next moment, the empty seat next to him was taken, and he leaned over to ask Singham how he got the tickets. As he did so, Singham leaned over to him. Huh? Singham?

An all too familiar fragrance, the soft hand that curled around his, with a softer Hello in his ear…

Baahubali lost out to the bigger blockbuster of his life.

Almost all the writes here have a way of writing themselves down. This one is no exception. I’m merely a tool in the hands of them words; therefore any responsibility for the nonsensical nature of this one rests solely with the words, not the rambler, who has said many a time that she is but a conduit 😛

Leaning into you,
Tucked under your arm
Your eyes distant
As you watch the news…

Twisting slightly, thisaway
So that my left ear
(that favourite ear)
Presses over your heart…

Poking, prodding, spinewards
To listen for a rumble
That adds to the rhythm
Of your heart beat 🙂

I ask your heart:
If I were, where
This were, in the pages
Of a sweet, mushy story…

But then, your rumble answers: 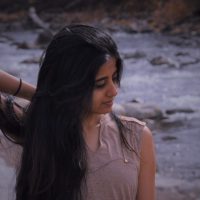